Reijo Salonen, Senior Vice President of Research and Development of Pharmaceuticals and Chief Medical Officer from Orion and Reetta Kivelä, Co-Founder and Chief Technology Officer from Gold&Green Foods have been elected as Finland’s CTOs of the Year 2017. In the selection process, the emphasis was put on companies with significant societal impact. “Election of the awardees was exceptionally unanimous this year. Salonen and Kivelä have both shown their remarkable contribution to their companies and to their societal networks”, says Chairman of the Jury Harri Kerminen. CTO of the Year award is a joint undertaking by Tekes and Spinverse.

The award has been given to CTOs in Finland since 2010. Once again the jury decided to award winners from two categories: SMEs and large corporations. In the corporations’ category, Orion’s impact on Finnish pharmaceutical research and development gained the jury’s attention. Orion develops, manufactures and markets human and veterinary pharmaceuticals, active pharmaceutical ingredients and diagnostic tests and is a clear market leader in Finland. In the SME category, Gold&Green Foods stood out from the other candidates. Gold&Green Foods was established in 2015 and their first product, Pulled Oats™, attracted wide attention even before reaching the stores in May 2016. Pulled Oats™ hits the focal point of global megatrends; it is simple and easy-to-use alternative in cooking but it also addresses the rising concern of environmental pressure caused by meat production.

“Gold&Green Foods’ products are an answer to a greater global challenge, whereas the economic and research development at Orion have been exceptional during the last 10 years. This years’ winners present fundamentally different industries in comparison to the previous winners. This is the first time the awardees are from the food and pharmaceutical industries. The jury’s view is that both companies’ business combine significant technological and societal aspects”, Kerminen concludes.

Thriving innovation culture through organizational transformation in the pharmaceutical industry

Reijo Salonen was appointed as Senior Vice President, Research and Development of Pharmaceuticals in 2006. Before that, he held senior research positions at GlaxoSmithKline and Pfizer. At the time, Orion was facing a challenging situation in R&D and the company was lagging behind major multinational pharmaceutical corporations. Reijo Salonen led the organizational culture change of the entire R&D department towards a more open, transparent and enthusiastic culture in all R&D activities. His solid experience and broad networks contributed to the positive development of Orion’s business and profits – not to mention the positive effects of new medicines to the world.

Organizational transformation enabled establishing open innovation processes in the company. At the same time as Orion focused its internal efforts in gaining competitive advantage, the company adopted a strategic approach to outsourcing research of its non-core activities and started conducting research projects as external scientific collaborations on a global level. With the help of the broad collaboration networks, Orion’s resources and competences grew. An example of Orion’s R&D achievement is the medicinal treatment for the symptoms of Alzheimer’s disease, which The Chemical Industry Federation of Finland granted the 2014 Innovation Award. Another achievement from Orion’s R&D is the novel prostate cancer treatment, which was among the five finalists in the Innovation Award in 2016. Orion aims to bring the prostate cancer treatment to markets by 2019 and the Alzheimer’s disease treatment later on.

“The organisational change took some effort and now we can see the its results in the development of innovative products. It is exciting to see that our success has been acknowledged more widely”, Salonen comments.

Solution to the environmental challenges of meat production

Pulled Oats™ is a result of Kivelä’s development work and she was chosen as Finnish Young Researcher Entrepreneur 2015. The idea of Pulled Oats™ came from the CEO of Gold&Green Foods Maija Itkonen, who proposed to Kivelä her idea of a plant based protein with oat as a main ingredient. Kivelä’s previous work had focused precisely on research and processing of oat fiber’s beta-glucan.

“It is great that Pulled Oats™ gains recognition. CTO of the Year award is a recognition for the entire Gold&Green Food product development team, not only a personal achievement. During the last years, health and nutrition awareness has increased and therein lies the key for solving some of the great challenges we face globally. The food industry is going through revolutionary times and Pulled Oats™ might be a key element in it”, Reetta Kivelä comments. 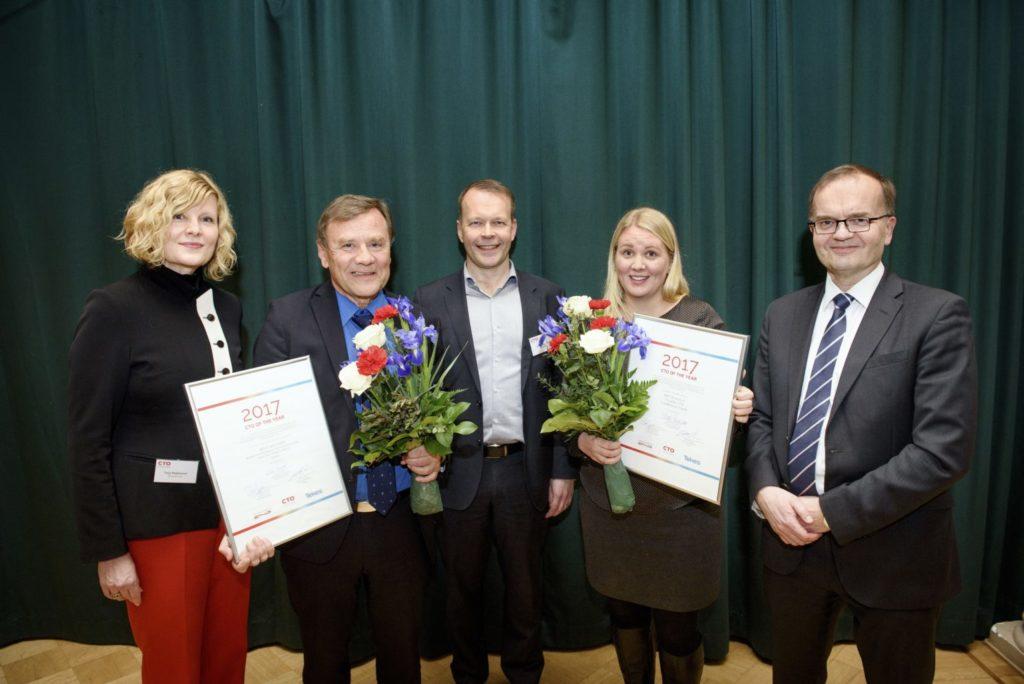 This year, Finnish CTO of the Year prize is awarded for the seventh to highlight the importance of Chief Technology Officers to the future competitiveness of Finnish industries. The CTO of the Year is an inspiring leader and has an active role in the society. The awardees are chosen by a jury consisting of leading technology experts in Finland. The chairman of the jury is Harri Kerminen. The CTO Forum is a community of Chief Technology Officers and technology leaders to learn from their peers and benchmark against the best practices in the field. The Forum provides a platform for networking across different industries and for companies of all sizes, raises the awareness of Finnish technology leadership and promotes visibility of CTOs and their companies. CTO Forum and the CTO of the Year Award is organised in collaboration with Tekes and Spinverse.

The annual CTO Forum co-organised by Business Finland, Technology Industries of Finland and Spinverse is app...

Spinverse is one of the nine partners in the STARDUST project, launched in 2017, to create a miniaturised ne...

CTO Forum CTO of the Year

Have you worked with an exceptional CTO in Finland? Would you also like to highlight an innovative professor...

Talking about the future of health technologies with Heli Teerenhovi

Heli Teerenhovi joined Spinverse as Senior Manager less than two months ago and has already familiarised her...